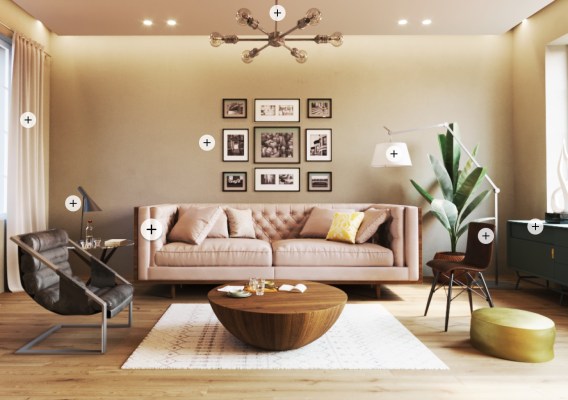 Alon Gilady, CEO of RenovAI, told me his startup is trying to solve the problem that many of us face when we’re moving into a new home — we aren’t interior designers, but we can’t afford to hire real designers, either.

Apparently Gilady’s co-founder and vice president of products Alon Chelben had this issue himself when he moved into a new apartment and tried to use DIY design applications, only to be disappointed by the “very ugly” results.

“He thought to himself, ‘I cannot design,’” Gilady said. “From that idea, we realized that there’s an opportunity here.”

While there are other online design services, Gilady said most of them are focused on creating 3D visualizations, or on connecting customers with a human designers.

RenovAI (which is part of the current class of startups at Alchemist Accelerator) can also create visualizations, but its focus is on building AI tools that understand the principles of good design. And while the team started out by thinking of the consumer problem, they decided that the best path to market was by working with retailers.

RenovAI’s products can design an entire space based on a customer’s specifications and taste. There’s also RenovAI Scout, which recommends a specific product based on your taste and current room design; and Complete the Look, which recommends items that complement what you’re already buying.

But what does it mean for an AI to understand good design? Gilady said the team has trained its algorithms on “thousands of different floor plans” to understand the rules of how a room should be laid out, and also broken down design into 16 different “substyles.”

“Our picture recommendation engine goes through the images to understand the relations between the items, the color, the palette, the texture and material,” he said. “It does a statistical analysis to understand how things are matching each other, how to create the design rules of every substyle.”

RenovAI already has pilots with online furniture retailers like Made.com and Mobly. And Gilady said that there’s plenty of opportunity for growth, even during the COVID-19 pandemic, since plenty of people are stuck at home and wanting to make improvements.

“I think more and more retailers and mom-and-pop shops paying more attention to online,” he said. “[They know] that if they offer a more fun and seamless experience online, in the long run, it’s a bigger opportunity and we can reach more customers.”

Outreach nabs $50M at a $1.33B valuation for its sales engagement tools

The Not Company, a maker of plant-based meat and dairy substitutes in Chile, will soon be worth $250M