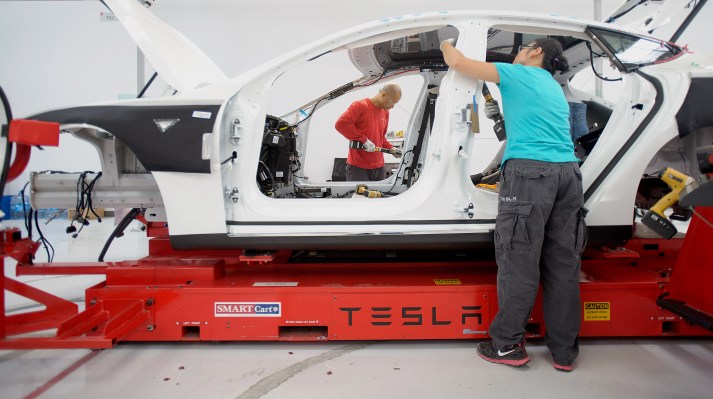 This comes after Musk sued the county it operates in to allow Tesla to restart manufacturing operations. In the filing, Tesla seeks to invalidate Alameda County’s closure order, which Tesla says goes against the county’s health and safety guidance. Tesla had planned to bring back about 30% of its factory workers last Friday as part of its reopening plan, defying Alameda County’s stay-at-home order.

Before filing the suit, Elon Musk said that if unable to reopen facilities, he would move Tesla’s operations to Texas or Nevada.

Mnuchin added that California should prioritize “doing whatever they need to do to solve those health issues…” before moving Tesla to a different state. He said, incorrectly, this is because Tesla “is one of the biggest employers and manufacturers in California.” According to several employment reports, Tesla, with its 10,000 employees at its Fremont facilities, is not one of the biggest employers in the state though one of the largest manufacturers and the only major automaker.

When Musk announced Tesla’s reopening plans, he said he was basing them basing the reopening on new guidance issued Thursday by California Gov. Gavin Newsom that allows manufacturers to resume operations. However, the same guidance stated that local officials, such as Alameda County, had the option of keeping more restrictive rules in place.

“Alameda County has expressly recognized and publicized that “businesses may . . . operate to manufacture” batteries and electric vehicles,” the complaint reads. “Inexplicably, however, the Third Order, as well as County officials, have simultaneously insisted that Tesla must remain shuttered, thereby further compounding the ambiguity, confusion, and irrationality surrounding Alameda County’s position as to whether Tesla may resume manufacturing activities at its Fremont Factory and elsewhere in the County.”

That Whole Foods is an Amazon warehouse; get used to it