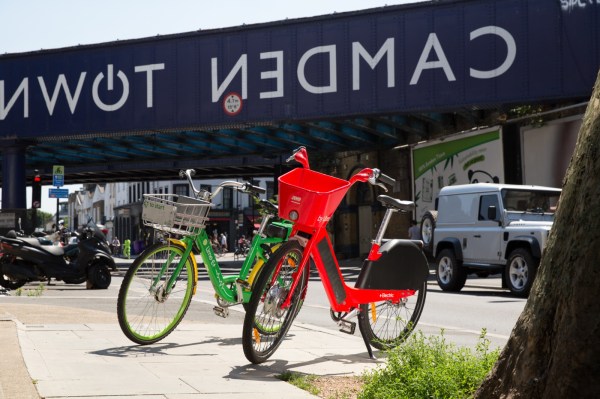 Jump bikes are returning to London — this time through its new owner Lime .

London is the first city in Europe to see Jump bikes return since Uber offloaded the company to Lime in a complex deal that unfolded in May. Lime raised $170 million in a funding round led by Uber, along with other existing investors Alphabet, Bain Capital Ventures and GV. As part of the deal, Lime acquired Jump, the electric bike and scooter division that Uber acquired in 2018 for around $200 million.

When the deal closed with Lime, thousands of Jump bikes were scrapped in the United States and the entire Jump team — some 400 employees — lost their jobs. Lime closed the acquisition of Jump in Europe several weeks after the transaction closed in the U.S. Until now, it was unclear if the Jump bikes in Europe would suffer the same fate as their counterparts in the United States.

Thousands of Jump bikes were pulled off the streets in European cities such as Berlin, Brussels, Lisbon, London, Madrid, Malaga, Munich, Paris, Rome and Rotterdam. It’s unlikely that Lime will put Jump bikes back in all of these cities. Sources have said Lime plans to redeploy Jump scooters and bikes in London, Paris, Rome and Barcelona. Today’s announcement appears to be the first step.

For now, the Jump bikes will be available in the Uber app in London. The Jump bikes will be added to the Lime app at a later date as a result of ongoing systems integration, the company said. The fleet size will start at around 100 e-bikes and will grow based on demand. Pricing will be £1 unlock and 15p per minute thereafter. Bikes will be deployed in Camden and Islington, Lime said.

Demand for bikes appears to have prompted Lime to bring Jump back into service. The company said that since lockdown restrictions have eased, Lime’s e-bike rental service has seen record usage. The micromobility company said users are taking longer journeys and the bikes are being used more frequently. Lime also recorded its highest-ever usage in a single day over a weekend in mid-June with more than 4,000 new users. Lime said its e-bike network has now facilitated over 1.5 million journeys across London.

The reintroduction of Jump bikes in London is part of a broader plan by Lime to increase its presence in the city. Earlier this week, the UK announced that an e-scooter pilot program would begin Saturday. Lime said it has partnered with global insurance giant Allianz to provide coverage for Lime e-scooter riders in the UK. Lime said it co-designed a two-year safety campaign with Allianz that will run until March 2022.

No parties allowed at the Airbnb IPO

Too little, too late: Facebook’s Oversight Board won’t launch until ‘late fall’